“The Macy’s Thanksgiving Day Parade® is one of the most iconic annual parades in American cultural lore. This New York City parade — complete with a myriad of giant balloons, dancers, floats, cheerleaders, marching bands, clowns and celebrity performers and, of course, Santa Claus ushers in America’s holiday spending season. The first Macy’s parade took place on Christmas Day in 1924 and served as a means to attract customers to the Macy’s store in New York City. For this inaugural parade Macy’s employees (of whom many were immigrants) dressed as clowns, cowboys and assorted fun characters, and the parade included animals borrowed from the Central Park Zoo. Approximately 250,000 people attended this parade. In 1927, Macy’s parade organizers began using giant balloons, starting with the introduction of Felix the Cat, instead of live animals. Now the 89th Annual Macy’s Thanksgiving Day Parade® will attract 3.5 million spectators and will entertain more than 50 million television viewers. The three-hour Thanksgiving Day TV show has received at least twelve Emmy Awards for Outstanding Achievement since 1979.“

Characteristic of Having Commitment | Stamps 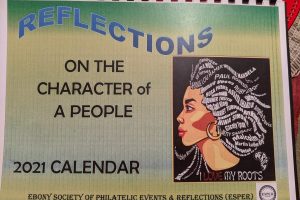 This 2021 calendar is available at www.esperstamps.org. Each month is filled with interesting black history/heritage facts.

A composer and pianist, Scott Joplin is known as the “king of ragtime,” a significant development in modern music that combined African-American harmonies and rhythms with other musical styles. In 1899, Joplin composed “Maple Leaf Rag,” which was the genre’s biggest hit. He included ragtime songs in his opera Treemonisha, the first opera composed by an African-American.

In 1976, almost 60 years after his death, Joplin was awarded a special posthumous Pulitzer Prize for his contributions to music. Read more at the National Postal Museum https://postalmuseum.si.edu/object/npm_1985.0796.3148 page

Since the founding of the United States, African Americans have played a pivotal role in the shaping of American history and heritage. Their contributions to America have included the fields highlighted by the 1940 Famous Americans and many more. This virtual exhibition showcases the black experience in the United States through the lens of American postage stamps.

The Art of Philatelic Inclusivity/African American Suffragists & the Vote

Looking to expand your collection? Check out Canadian options on EsperStamps.org

Did people always use stamps? No.

Before stamps people who received letters had to pay for their delivery. People wanted to prepay postage to speed up their mail. Stamps were invented to stick on letters, to show that postage was paid. Check out EsperStamps for more information.

The Negro Leagues Baseball stamps pay tribute to the all-black professional baseball leagues that operated from 1920 to about 1960. The National Postal Museum is currently featuring original art produced by Kadir Nelson for the creation of the stamps. On loan from the U.S. Postal Service.