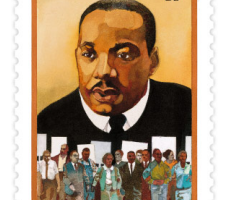 Martin Luther King, Jr. was born in Atlanta, Georgia on January 15, 1929. His religious upbringing in the King home shaped his destiny and thereby shaped the destiny of Black Americans, now and for evermore.  He graduated from Morehouse College at the age of nineteen and entered Crozer Theological Seminary in Pennsylvania.  He graduated at the top of his class and was awarded a Doctoral Degree in 1955, Martin Luther King returned to the South to pastor the Dexter Avenue Baptist Church in Montgomery, Alabama.  King founded the Southern Christian Leadership Conference in Atlanta in January 10, 1957 to coordinate all civil rights activities.  In 1963, Dr. King organized the March on Washington where he delivered one of his most famous speeches, “I Have a Dream”

On December 10, 1964 at the age of 35, he received the Nobel Peace Prize.  Martin Luther King was assassinated while protesting the rights of 1,200 sanitation workers in Memphis, Tennessee on April 4, 1968.